Daughters are always touted to be daddy’s little girls, and, for as long as they live, they continue to be so. It is no hidden truth that a father is the first man in every girl’s life, and while he is the superhero, he also is the idol to look up to for the sons. The answer to why do daughters love their fathers so much lies in their relationship itself.
It is after all, the fathers who she can turn to with every wish, and with every demand. Sons are closer to their mothers, and daughters to their fathers, and, that’s just how it has been since forever. Now, if everyone is wondering as to why do daughters love their fathers so much, then let us list down 10 reasons for you!

10 Reasons Why Do Daughters Love Their Fathers So Much? 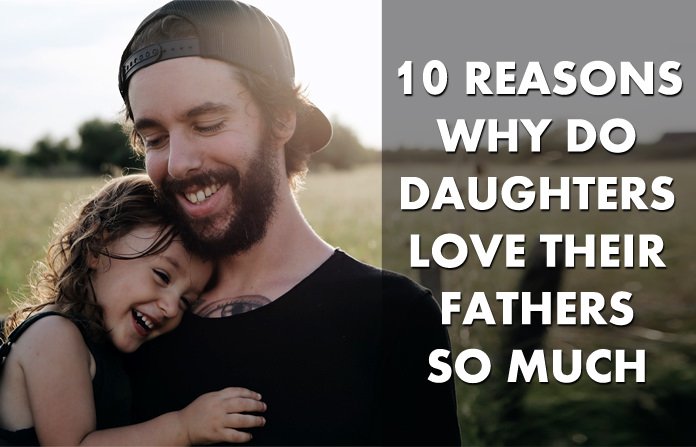 Every time a girl is asked to choose between her mother and her daughter, she goes on to say both, but deep down, she knows that it will always be the father. After all, he has spoiled her ever since she could begin to talk, and before the two of them knew, it all just becomes a way of life. The daughter’s unconditional love, and the father’s affection. The first man in her life, a guy needs to match up to him, if not equally, at least somewhere close, for it is the fathers who always set the standards so high!

2) They teach daughters lessons that no one else ever can

If it wasn’t for the fathers, then who would motivate daughters to fight back every time life brings them down? Imagine dealing with the so many failures and not having anyone to help us through. Fathers teach daughters to be as strong as weak and sensitive. If there’s solace in a mother’s arm, then there is peace in a father’s talk.

3) Fathers are the ultimate role model

4) They are the confidence boosters

When you’re scared, your mother helps you get through it, but, it is the fathers who help you fly through it. There is so much more of confidence and encouragement that a father is capable of providing to his child. If there’s even a bit of risk involved in anything that a daughter does, the mother displays worry, but the father always shows trust and confidence.

Check – How to deal with depression?

5) The protector – from evils and from everyone else

Seldom does a father find any flaw in her daughter, and, dare if anyone does for as long as she has him. A father wouldn’t hear a word against his daughter, and neither would let anyone else do that to her. Her safety is always his priority, and her wishes are his commands, irrespective of how much they cost or what is at stake.

6) His struggles: In life, and with life

A daughter acknowledges the things that a father does for her. Right from something as small as an ice-cream to as big as her favourite mobile phone, he wouldn’t mind going through a struggle if it is for her. At the end of all that happens, her smile is all that matters to him and her happiness is what counts.

While there’s practically nothing in the world that a father would do for her daughter, there is one thing that a father would definitely not do – say no to the excessive love from her daughter. The mushy hugs and the everyday I love yous, the random shower of love or some PDA, for a father, their daughter is never too old enough to do that. For all the love in a daughter’s heart, the father’s arms seem to be just the right answer.

8) The perfect combination of sensitivity and strength

If mothers are the epitome of emotions, then fathers are the epitome of all things nice and a combination, a combination of sensitivity and strength. While there is no doubt in the fact that daughters are more compassionate, it also is a fact that it is the fathers, who, at so many levels help initiate it. They are strong, and they are weak, just about right and just at the same time, which is what daughters need to be taught, and which is what they always seem to sought out for.

If we go into a little bit of psychology, then the very obvious and the most reasonable answer to why do daughters love their fathers so much is the nature of opposite genders. Hence, it is always the father and the daughter while it is the mother with the son. There is an ease factor that helps daughters confide into their fathers!

10) For them, daughters are always their little baby girl

Children grow up, and gradually they also seem to disconnect with their parents, not emotionally, but in general. There are no I love yous, and there aren’t every day hugs, conversations reduce, and busy schedules take over the affection. But, irrespective of everything that happens in life, daughters remain their father’s baby girl. 2 in the night when he is sleepy, or 2 in the afternoon when he is busy, daughters just always know that he has got her back!

You may ask why do daughters love their fathers so much even after having listed down all of these reasons for you, and all I’d say is, why not!

ABOUT US
True Wordings is all about great thoughts and sayings.
Contact us: [email protected]
FOLLOW US
© Copyright 2018 - BY TRUE WORDINGS
MORE STORIES