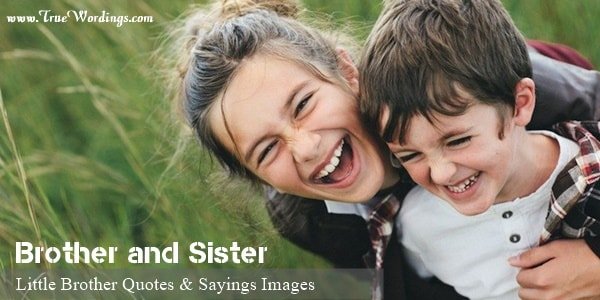 “The younger brother must help to pay for the pleasures of the elder.” ~ Jane Austen

As the younger brother, I think you always have crushes on your older brother’s girlfriends. ~ Liam Hemsworth

Brother and Sister Images with Quotes

I grew up with a younger brother, so I can get pretty rowdy. ~ Sarah Wynter

“ After a girl is grown, her little brothers — now her protectors — seem like big brothers.” ~ Terri Guillemets

This means a lot. He was more like my little brother than anything. ~ Unknown

I’m a lot older than my little brothers and sister, so I think I grew up babysitting them. ~ Josh Hartnett

My little brother is autistic, so I would love to be involved in a charity for autism, but I haven’t found the right one yet. ~ Nikki Reed

I am the middle child with an older and younger brother. ~ Eden Sher

There is a little boy inside the man who is my brother… Oh, how I hated that little boy. And how I love him too. ~ Anna Quindlen

Family doesn’t necessarily mean that you have to have a mother, a father, a little brother, and an older sister. ~ Bindi Irwin

I feel like my little brother has inherited the same musical talents I’ve been blessed with. ~ Samantha Mumba

If you want to know how your girl will treat you after marriage, just listen to her talking to her little brother. ~ Sam Levenson

I don’t want children cursing. I’m very strict on my nieces and my little brother. They have to listen to clean versions of music. Even my music. ~ Nicki Minaj

I’m a single child. I wanted a little brother or a little sister growing up, but when I think about it, I’m happy I’m an only child. ~ Mae Whitman

I’d pull my little brother on our motorcycle on an inner tube behind it. We would go fishing, we would hunt some, growing up. ~ Sam Brownback

My younger brother and I have been writing together, mainly for fun, for years, but we’ve been improvising together since we were kids. Literally. ~ Ty Burrell

I have a little brother. He’s actually living at my house right now. He’s going to be 18. ~ Edward Furlong

I wish I could say I see my little brother more. We used to fight all the time but now that I don’t see him very often I cherish the time I have with him. ~ Zac Efron

I’m a little brother. I’ve always been small. People have said I have a Napoleon complex. But I’ve always had to fight for everything that I have. ~ Chris Paul

I am inherently a little brother – that’s just my nature. It has to do with my sister being very strong and wanting to protect me. It’s the natural order of things. ~ Jake Gyllenhaal

To be able to have winning in your blood growing up, whether it was pounding my little brother or trying to beat my dad in something, or just competing on teams with my friends, it was nonstop. ~ Jordan Spieth

ABOUT US
True Wordings is all about great thoughts and sayings.
Contact us: [email protected]
FOLLOW US
© Copyright 2018 - BY TRUE WORDINGS
MORE STORIES

Be The Kind of Woman Quotes